A few months ago, I wrote about how a small group of engineers with a noble idea created open source software and changed the world. The idea proved the collective intelligence model for software development and allowed for an explosion of software products. In this post, we will explore how those early gains accelerated quickly through cloud computing and the birth of Software as a Service (SaaS).

In the mid-1990s while Red Hat CEO Bob Young maxed out his wife’s credit cards to keep his merry band of software developers afloat, the idea of cloud computing was making early advancements. Cloud concepts like virtual private networking, virtualization and application service providers (ASPs) were being explored by both technologists and businesses with varying degrees of success.

ASPs are often regarded as precursors to cloud software. As internet connections became better and cheaper, running every software application on-premise made less sense to businesses. Costs, such as hardware and a team to manage the system, quickly wore on them during the tech boom of 1997-2001.

An ASP’s value was refocusing a business’s tech resources on core business functions. ASPs ran off-premise data centers which end-users accessed via internet through standard client software - all appearing seamless to the users. Line of business owners liked the cheaper method of managing their IT, but the wise also foresaw a path which would allow business units to regain some of the power ceded to IT staff.

While the cost savings ASPs offered were good, there was still plenty of opportunity for improvement. Using an ASP was disruptive in that it offered labor savings, but the single-tenant nature of the ASP didn’t offer the economies of scale to make it a long-term solution.

What if customers’ applications could run concurrently shared across distributed computing arrays? What if those arrays could be imbued with more autonomic qualities as well?

The Confluence of Value

The cloud took a big step when virtualization and multi-tenancy were layered on the ASP model. But the giant leap began when open source technologies started dislodging costly proprietary products in the development and (eventually) production stack.

“In the early years of the company, the standard-issue workstation ran Windows. But a few developers noticed that building the Salesforce application went much faster on Ubuntu Linux, using the same exact hardware — cutting the build time from hours to minutes. They started passing around a CD, and before anyone knew what had happened, the change went viral and nearly everyone in engineering had switched to Linux.”

The story goes on that Salesforce.com’s corporate IT team soon followed and loaded Ubuntu on new laptop issues.

Nowadays, Salesforce.com uses and contributes to a wide variety of Apache projects like Maven and Hadoop and even spearheaded the Apache Phoenix project. Not only have open source technologies been the platform on which their products stand, it has transformed how they write their code, writes Salesforce.com architect Ian Varley.

“Building software with open source in mind is inherently beneficial because it drives you to do plain old “good design.” If you’re going to share something with the world, it has to be loosely coupled to the rest of your systems, and it has to be cohesive and comprehensible — it has to “do one thing well.””

What started as quicker build times for Salesforce.com eventually became a sea-change (and competitive advantage) in the marketplace. Just look at how they have been able to take over the Customer Relationship Management market from entrenched on-premise vendors: 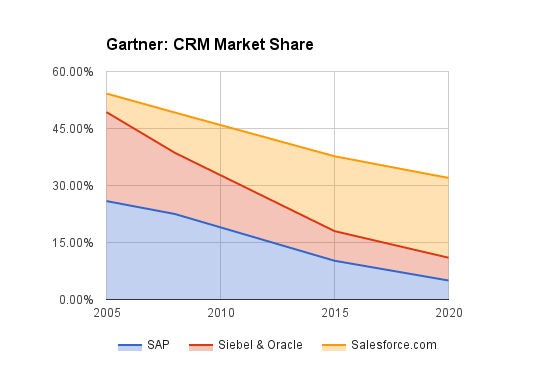 A market that was once dominated by on-premise solutions from old guard tech companies has been turned on its head in about a decade. Salesforce.com did it with newly available paradigms (web and open source) to quickly advance on products with too much hubris, or maybe better yet now that I am a Corgi, too much technical debt to keep pace.

Bob Young was right! By trying to “make the world a better place” Salesforce.com provided a cheaper, faster, more accessible and overall better product than their competitors did and the market lavishly rewarded them for it.

Salesforce.com’s capture of the CRM is just one story. In the last post of this series, we will explore how thousands of SaaS companies have adopted this model to disrupt markets or create entirely new ones.