Our work with legacy code doesn’t often put us in a position to move quickly into new or trendy tooling. And while we almost always introduce Docker very early in our projects, it is usually only for the purpose of standardizing and easing setup of developer environments. Transitioning a live environment to containers, however, can be a daunting prospect. There are a variety of reasons for that, many of which you’ve probably encountered yourself. I’ll list a few:

All these might be valid reasons, but this article will focus on our experiences in that last scenario — containerizing a monolith. For a more detailed exploration of the pros and cons of containerization, check out this article.

Most, if not all, of the legacy projects we work on feature monolithic application architectures. However, that’s not necessarily a reason to forego the benefits of containerization. Moving to a container can result in:

Those benefits can be extremely valuable, chiefly by better supporting your ability to get modernized code safely and reliably delivered. (We’ll deal with some of the downsides later on in the post.)

It can be daunting to containerize an existing application. There are usually a host of archaisms to account for as compared to a greenfield application: one-off cron jobs, file system dependencies, non-sourced helper scripts, and many more.

For the purposes of this post, we’ll use examples from a recent project we worked on. It is a medium-sized PHP project, initially deployed on Red Hat Enterprise Linux virtual machines (not in the cloud), with a SQL Server backend. Here’s a look at the architecture before we started the project. It is fairly typical for our projects — lots of manually configured servers that require fairly involved deployment procedures. 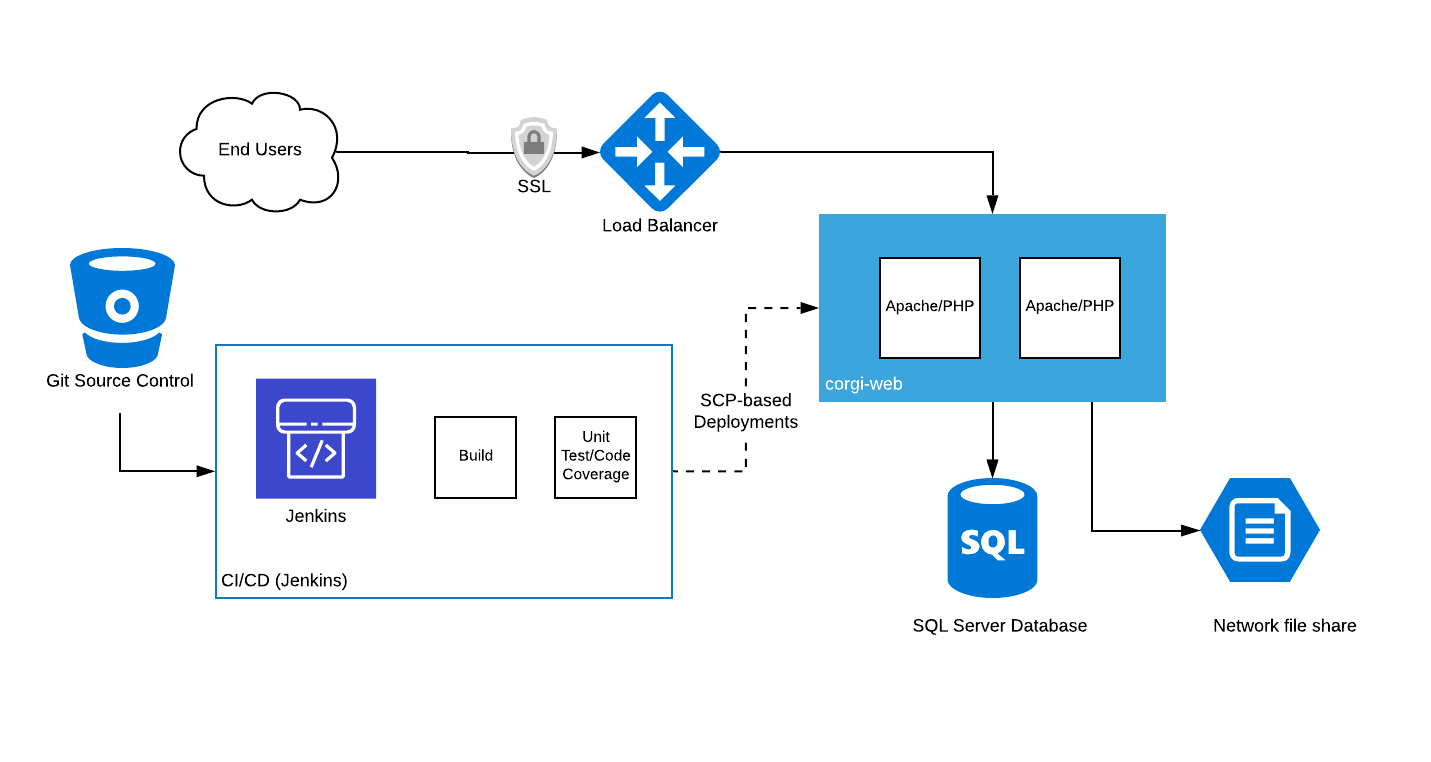 Just like when remodeling code, we recommend an iterative approach. In the early stages, you’ll be improving your application before you ever get to Kubernetes. However, these important early steps will safely lay the groundwork for getting your workload ready for containers in production.

Even if you’re not sure about containerization in a production context, containerizing your local development environments using Docker will pay huge dividends by:

There are other benefits you’ll realize down the road, but these alone should be reason enough to begin using Docker for local development. For this project, we introduced Docker a few months before beginning our Kubernetes journey. This gave us time to work out some of the kinks (SQL Server drivers running on CentOS!) in our images and assist the development team with getting set up.

For web applications, we generally guide our projects towards the adoption of the Twelve-Factor App methodology. These are a set of principles initially developed at Heroku, and are generally seen as a solid baseline for software as a service applications that are delivered over the web. They’re independent of language, tech stack, or server architecture, but address the problems that many codebases face.

Whether you deploy to containers or not, implementing these principles will greatly enhance the maintainability, reliability, and security of your application. However, there are a few of the factors that will need particular focus as you prepare to containerize:

A couple of other Twelve-Factor principles are more implicit in Docker/Kubernetes, so you get these for free:

Step 3: Build a proof of concept

Kubernetes can be complicated and is difficult to learn in one sitting. For that reason, we’d recommend starting off by building a proof of concept. This can provide valuable learnings, while also giving you time to vet the implementation you’ll be using.

Thankfully, Kubernetes does a great job of managing deployments. It’ll manage retrieving your images, provisioning and de-provisioning pods in your cluster, and managing traffic all the while.

If you don’t have a CI/CD pipeline, now would be the time to begin implementing it. However, instead of building and deploying a build artifact containing your code and dependencies as in a traditional CI/CD pipeline, you’ll build your application into a Docker image and tag and push that to a container registry. You’ll then kick off your deployment using kubectl.

As you become more comfortable with the basics and get a better feel for kubectl and how to automate your architecture, you’re ready to begin layering in more advanced components. Up until this point, we’ve introduced a substantial amount of complexity to deliver something fairly basic. However, these additional elements will be where container orchestration really starts to shine.

You’ve come so far, but before you launch, make sure you spend some time securing and testing your new cluster. Kubernetes doesn’t provide a lot of security out of the box, so you’ll need to implement some basics:

Finally, if you have end-to-end or browser tests, now is the time to leverage them on your shiny new Kubernetes stack.

Now is the time to reap the rewards of all your hard work! We’d strongly advise setting up telemetry and alerting so that you can monitor the health and operations of your cluster. Your cloud vendor likely has a plug and play option.

Okay, this seems doable - but what are the downsides?

And now for the big reveal! At the end of our monolith containerization journey, here’s a look at where we ended up. As you can see, there is a fair bit more complexity. However, it is much more robust, scalable, configurable, and deployable. 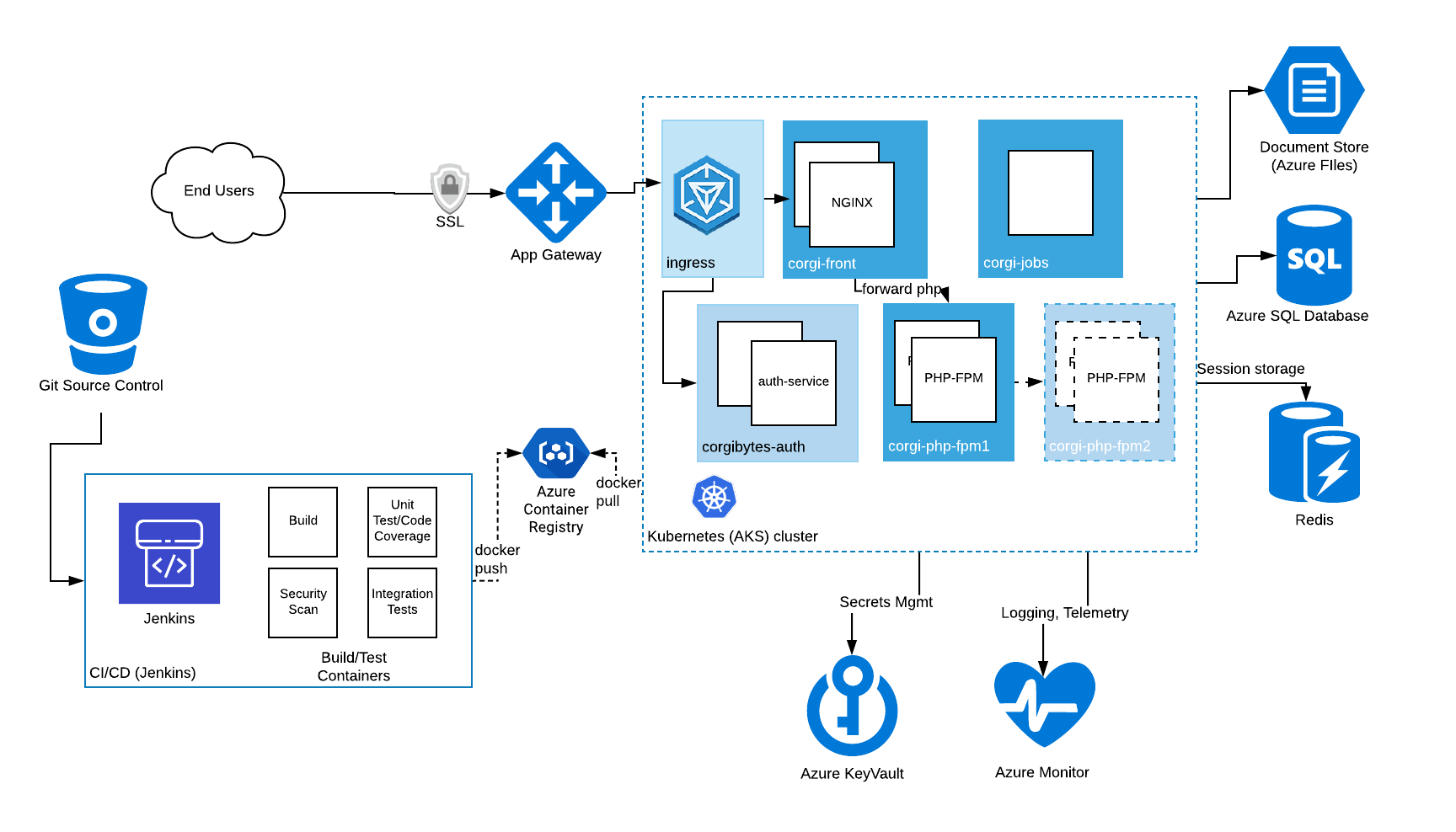 Hopefully, by now, you’ve got a better understanding of the steps involved with moving your monolith to a container architecture like Kubernetes. Although it’s no simple task, it’s also one you shouldn’t avoid just because you have a monolith. In most cases, the benefits will outweigh the downsides, particularly if your eventual goal is to decompose your application.